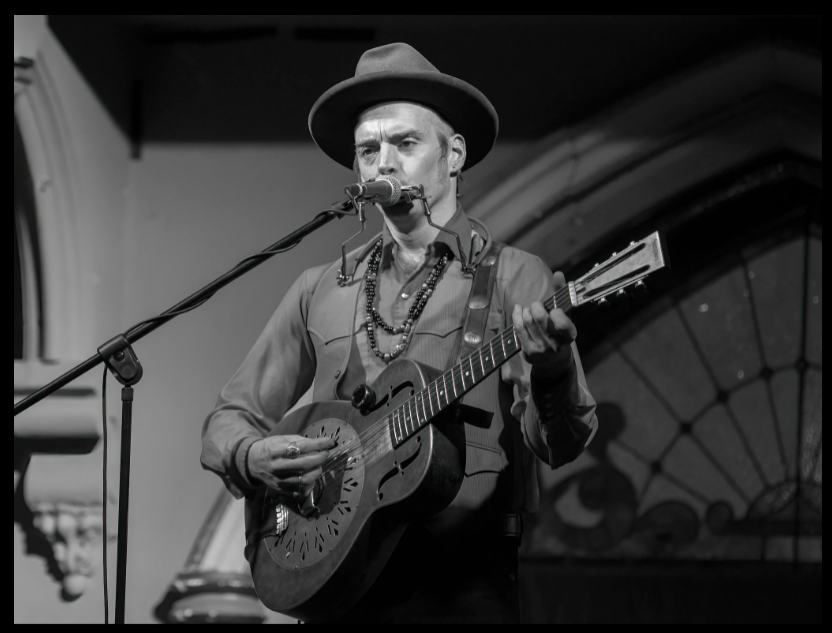 Jason Dea West is an American troubadour who sings what he lives and lives what he sings. Wests’ poignant lyrics are brilliantly blended with vintage country, folk and blues, and timely sensibilities. From epic guitar and harmonica instrumentals to humorous song as story, Jason never strays very far from the anarchic punk-folk roots of his beloved former band Barefoot Surrender and his celebrated current band Intuitive Compass.

Jason’s younger days as a busker and freight train hopper fostered his keen sense of road-inspired American musical history. Jason toured extensively with guest musicians and bands throughout the lower 48 States and Alaska, appearing in barn dances and taverns, theaters and music festivals, the circus and vaudeville circuits, on radio and in film. He has shared the stage with the likes of Lost Dog Street Band, The Resonant Rogues, Larry And His Flask, Hot Damn Scandal countless others.

Dea West has worked with several renowned recording engineers, including Scot Hackwith, Dennis Dragon, Dan Emery and Steven Hart, producing several studio albums and a recent live “Magnolia Session” via Anti-Corp Records of Nashville, TN which placed #15 on the Billboard Bluegrass charts in October 2020.  In 2021 West began work on two new EPs, one “Lost Camp Dreams”, with Scott Hackwith at Cassette LA which is officially available December  30th of 2021, the second EP to be released later in ‘22 shall remain mysterious until further notice.